Posted by ChamorroChica on Saturday, October 15, 2011 · Leave a Comment 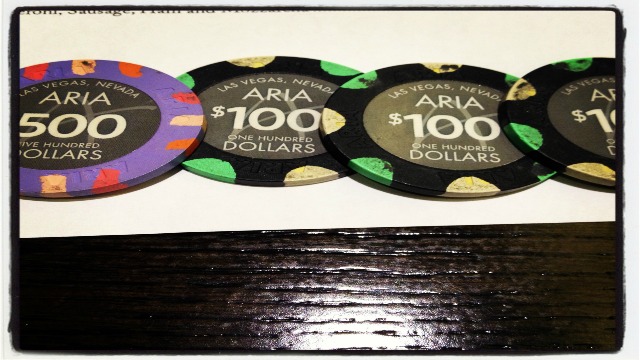 During our US trip Ozdane and I visited my dear friend RockStarMomLV who lives in Las Vegas. She was born and raised there and returned after college, got married and is now raising her family there. She truly is a Rock Star Mom with 4 kids including 1-year old twin boys. Wow! She’s a wonderful wife, a great friend and a talented writer who has a rock star blog you simply must check out! RSM and I met way back when at University of San Diego where we went to college. We’ve been good friends ever since. So it was a no-brainer to combine a weekend of fun in “Sin City” while spending time with my fabulous friend. She also hadn’t met Ozdane yet so he needed the RSM stamp of approval – which he did get by the way!

I hadn’t been to Vegas since 2006 and it had been a few years for Ozdane so it was fun to see what was new and what had changed. I was impressed with a few of the newer hotels that really add a bit of class to the strip. The Aria and Cosmopolitan are a couple of these. I was surprised to see a Mandarin Oriental there as well but again this brings that element of class. Once you’re out and about on the strip you get the Vegas vibe again but it’s nice to have the option to retreat to these types of establishments if you want a bit of a break.

I thought I’d share a couple of my favorite places from our trip.

We stayed at the Aria and we had a wonderful experience. The Aria is located in CityCenter. RSM’s hubby worked some magic and Ozdane and I were very fortunate to stay in an amazing suite in the Aria. Thanks RSH! I’ve seen other suites before but this one was pretty outstanding. It was a perfect combination of classiness with a trendy flair. Wall to floor windows revealed outstanding views of the strip. Everything was high-tech and modern. The bathroom was as almost as big as most hotel rooms themselves with large closets,a big bathtub and fabulous shower that included a steam function. Yes I did take advantage of the fact we had our own private steam room in our shower. It was just the two of us staying in the suite but the main area was large enough to entertain a number of guests. Ozdane relaxing in the beautiful suite at Aria

One day we did the cabana poolside thing as you do in Vegas. The cabanas at the Aria were great also. They stayed with the classy but trendy theme and the service at the cabanas was superb. They have a couple of different sections; one that is a bit more family friendly for kids and another that is more adult friendly so you have a choice. If you’re going to spend the day at the pool a cabana is the way to go. Inside of poolside cabana at Aria

The Aria has a good selection of restaurants and bars to choose from depending what you’re in the mood for. We had drinks at a couple of the lounges but didn’t get a chance to dine at the restaurants this time around however we definitely will next time. I really liked the ambiance of the casino section of the Aria. It’s fair to say Ozdane and I spent a good amount of time at the blackjack tables – Paint It! I found Aria to be much classier than many of the other Vegas hotel casinos and lacks that cheesy quality that seems to be the norm in many of the other establishments. It doesn’t feel too large where you can get lost and almost has a boutique feel to it even though it not nearly as small as a typical boutique hotel. We were also impressed with the service everywhere we went within Aria. Everyone was friendly and happy to assist.

If you’re looking for somewhere new to stay in Vegas I highly recommend Aria. A big Chamorro Chica thumbs up!

The Wicked Spoon is located in The Cosmpolitan Hotel which is a short walk from the Aria. You never have to go out on the strip so it’s quite easy. A friend mentioned to me there was supposed to be some wonderful buffet in The Cosmopolitan and we discovered it was the buffet at the Wicked Spoon. Staying true to form I checked it out on TripAdvisor first and after reading the rave reviews I knew we had to go. You can’t make a reservation so you wait in line to get seated. However the line moves fairly quickly as it is massive so there is no lack of tables for all group sizes. You’re probably thinking there are a million hotel buffets in Vegas but I promise you The Wicked Spoon is unique. It comes down to the food. It isn’t your typical boring buffet food that usually is quite mediocre from a culinary perspective but people don’t care because they can go back for seconds, thirds, fourths, etc. True American style! The buffet at the Wicked Spoon includes food from different parts of the world and much of it has a gourmet twist to it. The macaroni and cheese at the Wicked Spoon isn’t your everyday mac and cheese, the Eggs Benedict was flavorful, there is a variety of gourmet salads, scrumptious meats prepared in all different ways. It was truly overwhelming to figure out what you wanted to eat since you want to try just about everything! The desserts were outstanding. Chocolate fondue, strawberry shortcake, fudge, all different types of cakes, chocolate covered strawberries with crushed oreos on them and more and more. The venue itself is very large so there is constant turnover which really does keep the waiting time down. A complimentary bloody mary or mimosa is included with the buffet which is perfect if you’ve indulged until the wee hours of the morning Vegas style!

The Wicked Spoon is open every day for brunch and dinner. Daily brunch until 2pm and weekend brunch until 3pm. Another big Chamorro Chica thumbs up!

Our trip really wouldn’t have been as amazing as it was without RSM and her fab hubby. So a big shout out and thank you to both of them!