Our third day in Hong Kong I was flying solo playing “Dora the Explorer.” My partner in crime had business to attend to. I decided to get out of the hustle and bustle of the city area and do something a bit different. I ventured out to Lantau Island to see the Tian Tan Buddha Statue, also referred to as Giant Buddha.

The journey out to Lantau involved a taxi ride, train ride then a sky cable car ride to Ngong Ping Village on the island where the Buddha sits. My little adventure started when I got in the taxi at the hotel. I had a hysterical cab driver, definitely the most unique I’ve had so far in HK. Our conversation went something like this:

Me: Oh thank you, very nice of you.

Cab driver: Me too!

Next thing I know the Beatles are playing in the taxi full volume but my taxi driver was singing even louder than the music. He was dancing around in his seat yelling the words with his accent. It was priceless and made me smile! I love friendly, funny cab drivers. I thought to myself that my adventure was off to a good start.

My train ride out to Lantau was 7 stops and a good 25-30 minutes which gave me plenty of time for prime people-watching. I only spotted a few other Caucasians in my car on the train so it was a chance to observe some of the locals or tourists from other Asian countries. Every stop was a revolving door of people. Teenagers, families, older people, parents with babies, toddlers. Some little kids boarded who were bouncing up and down like energy balls. I wondered if they were headed to the Disneyland park and were overwhelmed with that excitement and anticipation you get when you’re younger and going somewhere fun. Surely they woudn’t be that excited to see a Buddha…or would they be? 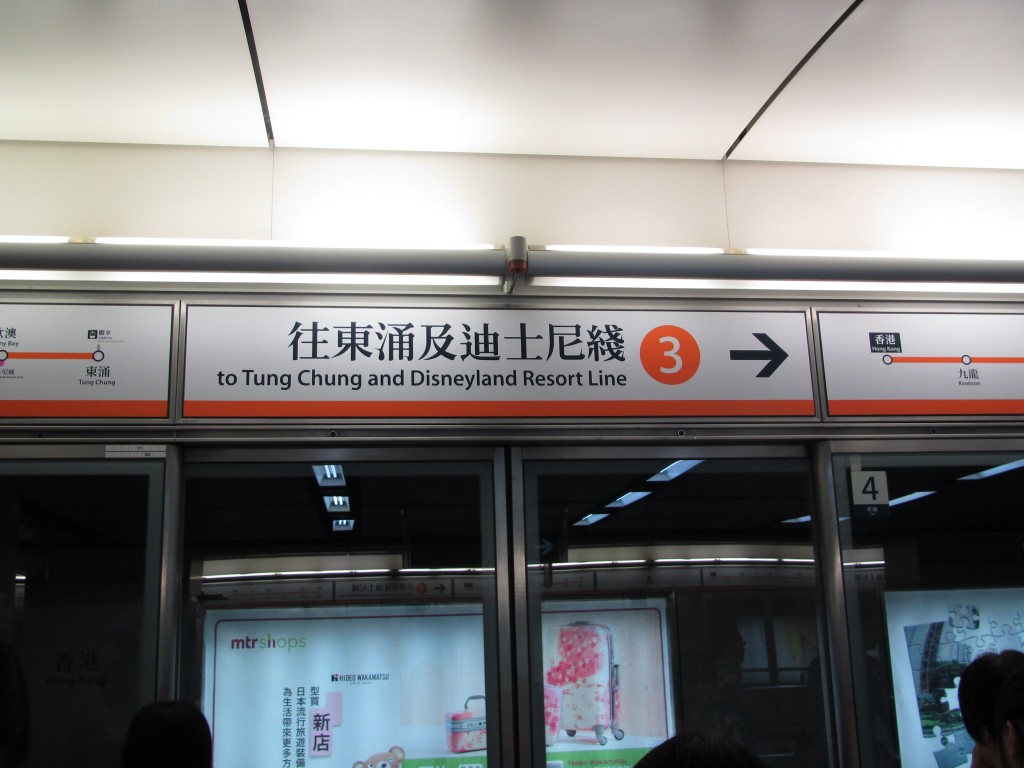 Along the train ride the terrain quickly changed from city buildings to long stretches of land and then water. The train went through Kowloon, Olympic, Nam Cheong, Lai King, Tsing Yi, Sunny Bay and then finally arrived at my stop Tung Chung. Tung  Chung was not only a train station but a rather large shopping complex, movie theater and restaurants. It seemed odd to me as I felt like we were out in the middle of nowhere. I made my way to the sky cable car building, bought my ticket and off I went with 6 others I was grouped with in our glass-bottomed cabin. I always find the glass-bottomed ones quite cool so you can see below you.

Glass-bottom cable car. Water below us.

Again I was in awe of the natural beauty I was seeing and the great contrast between the city streets of HK and this greenery. During the sky cable car ride you see Tung Chung Bay, HK airport (yes random I know), Ngong Ping Plateau, Lantau North County Park and towards the end the Tian Tan Buddha Statue and Ngong Ping Village come into sight. The ride is about 25 minutes total so a good amount of relaxing time up in the air  admiring things around you. It’s also a lot of time to peer up at the cables your car is attached to and hope they are secure and well-maintained. It’s funny because those types of things never crossed my mind when I was younger. I must have a tendency to worry more in my older age. 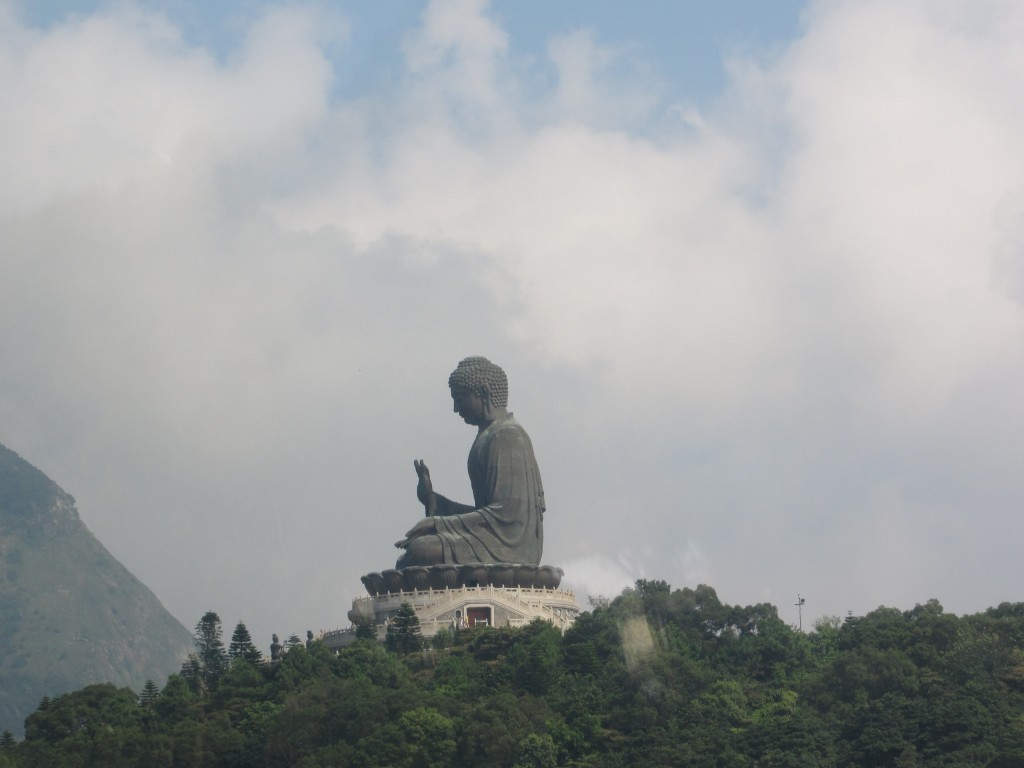 Upon arriving at Ngong Ping Village I remember just how incredibly hot it is out. I think yesterday was the hottest day of our whole trip. Of course I pick the hottest day to go walk in the scorching sun and climb steps to see the Buddha. I was thankful I was in a cotton tank top and shorts. I saw some tourists in long pants and long-sleeve shirts. I don’t understand how they can do that. I’d be passed out in about 5 minutes. So I did the smart thing and got a bottle of ice cold water and had some food to re-fuel before heading to see Buddha.

Ngong Ping Village has a handful of things to see and do aside from the Buddha but the statue is definitely the highlight. The village caters to tourists with their food venues, souvenir shops, photos of yourself you can buy, you know all that type of thing. The other things at the village:

- Walking with Buddha in a theater setting which takes you through the life of Gautama Siddhartha, the man who became Buddha.

I really was just interested in seeing the Buddha. Given it was late afternoon already and I was sweating like I just ran 10 miles I thought that was a good decision for me. 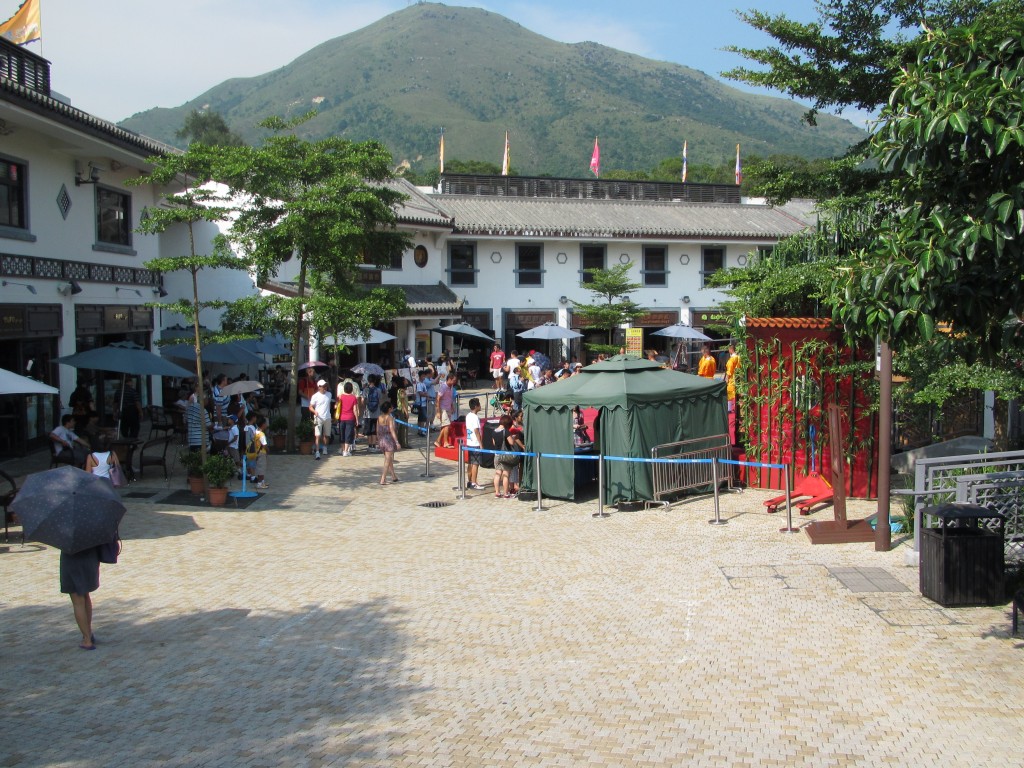 I enjoyed the walk to the steps up to the Buddha statue. There were some interesting other statues along the walkway. 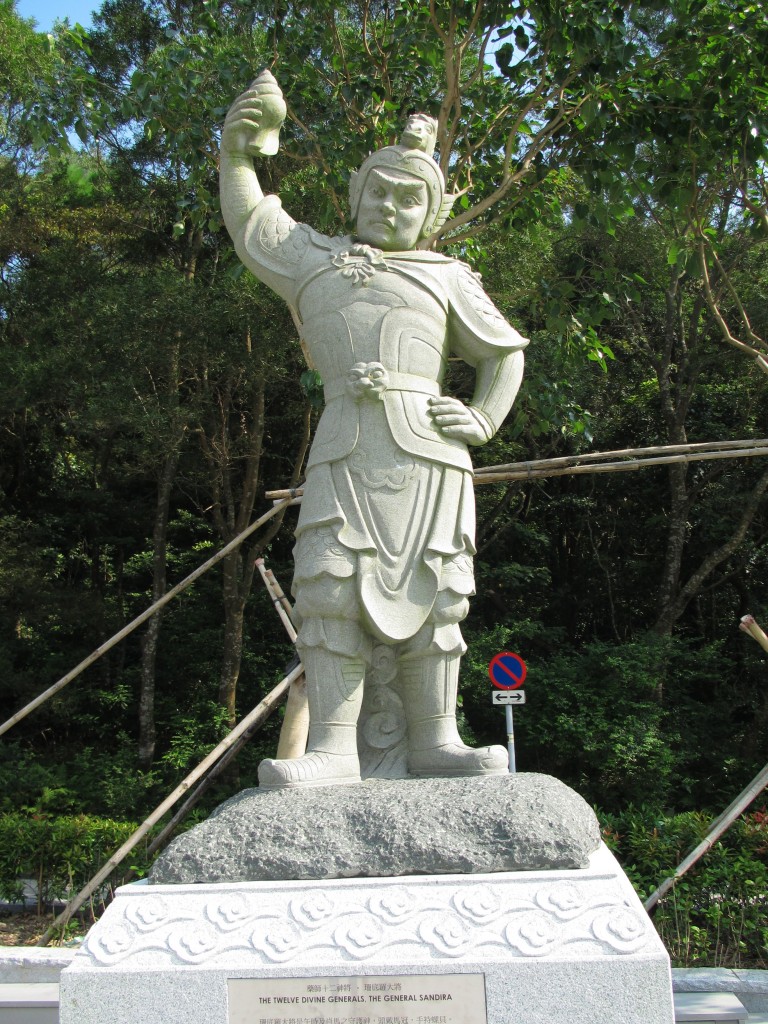 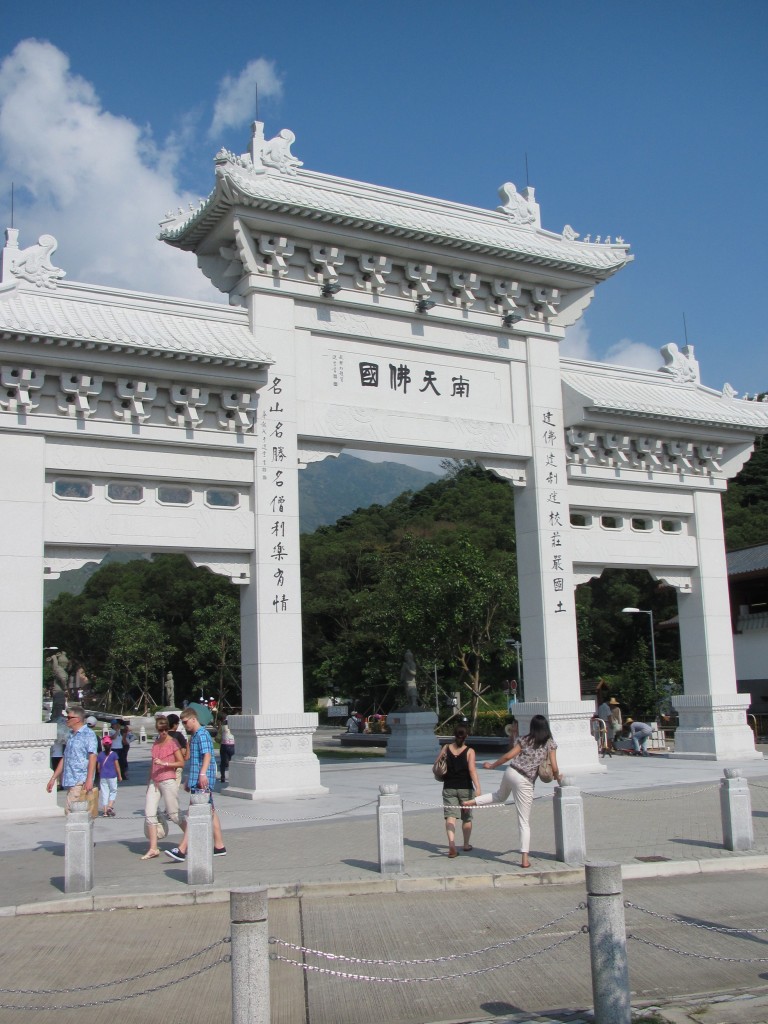 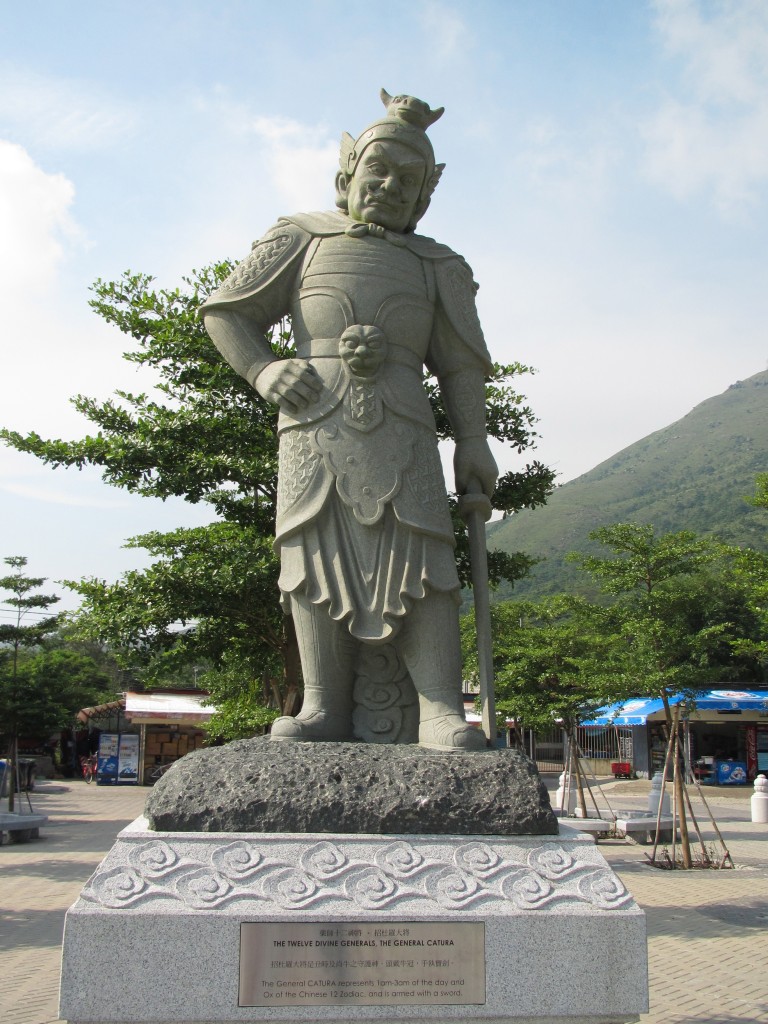 Finally I arrived at the steps up to the Tian Tan Buddha and felt instantly grateful I am somewhat fit at the moment or those stairs wouldn’t be fun in the heat. As you get closer to the Buddha it really is amazing to see. It is massive. This Buddha is the largest seated outdoor bronze Buddha statue in the world. The statue is 26 meters high, made up of 202 separate bronze pieces and weighs 250 tons. It really is magnificent to see. The setting where the Buddha sits is beautiful. There is greenery and hills surrounding you. It feels peaceful when you are up there and an appropriate place for the Buddha to sit. 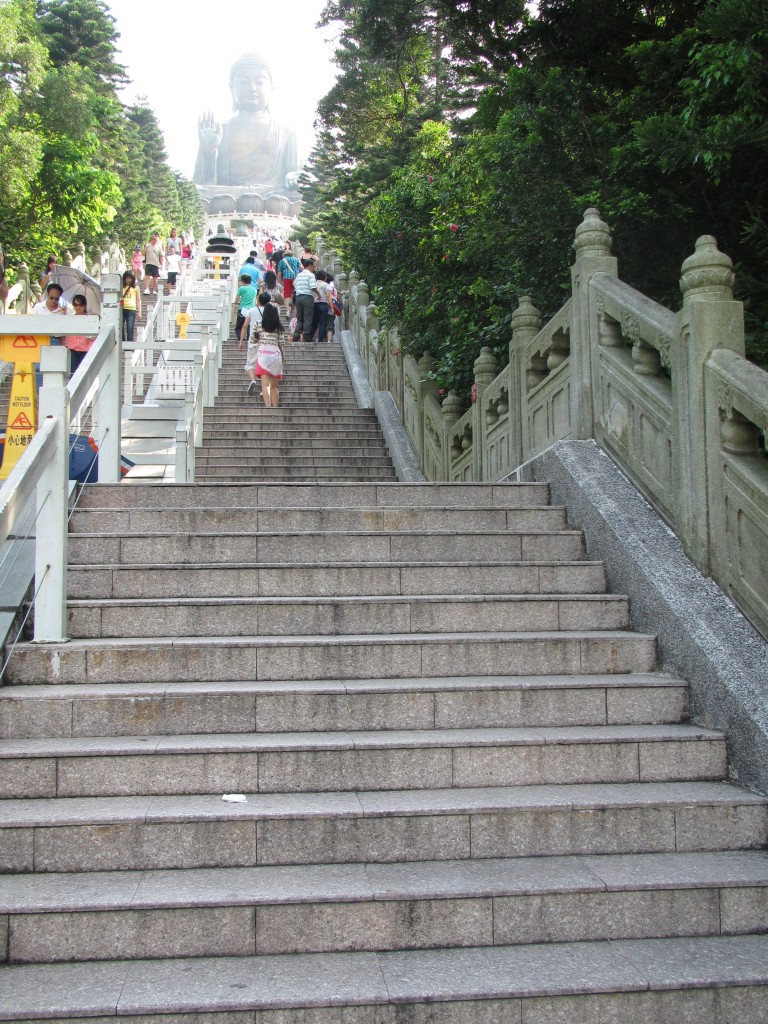 Instead of rambling on I will leave you with these pictures that try to capture the beauty of the Buddha. I think it is one of those things you have to see in person to really get the full impact though. 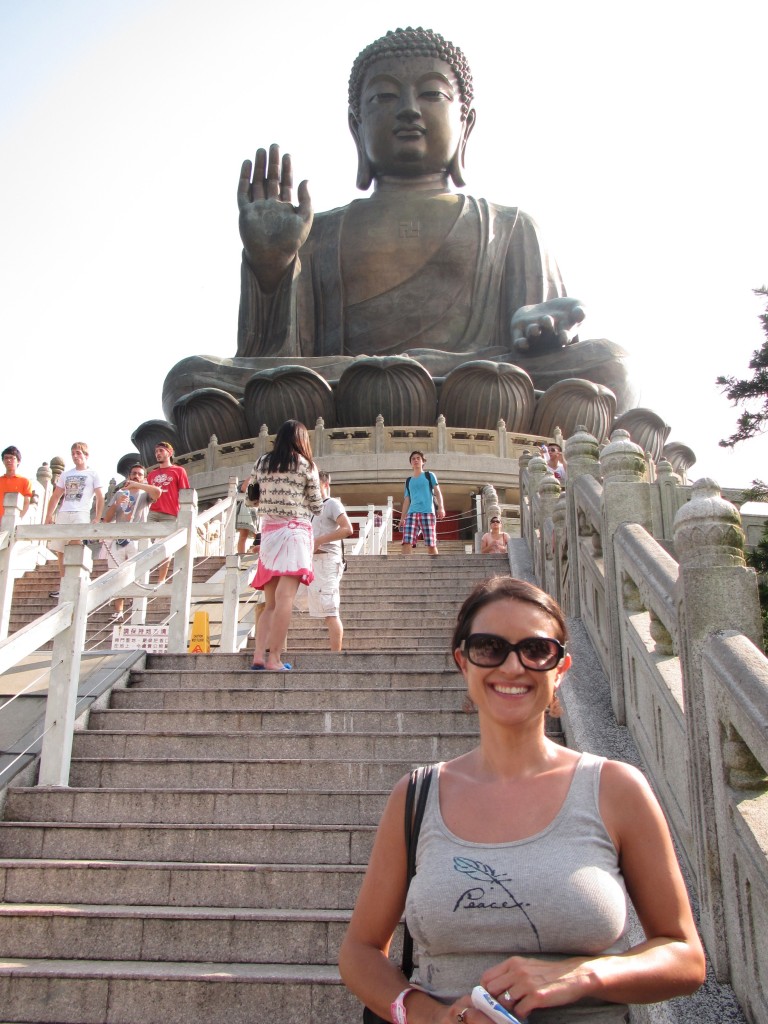 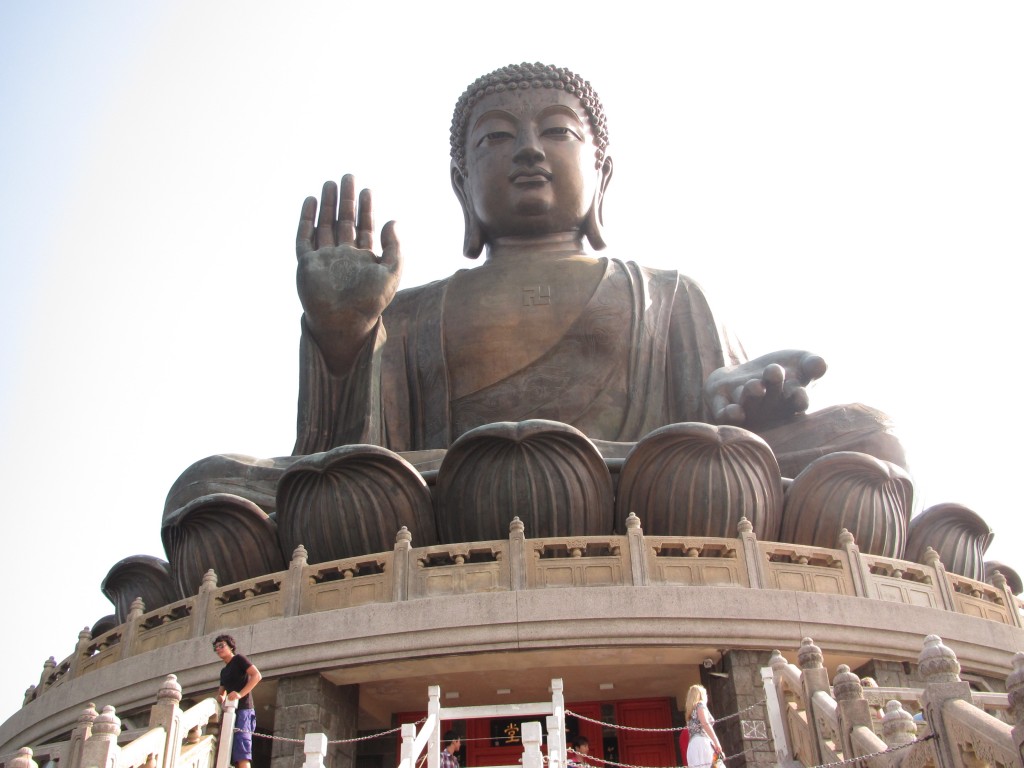 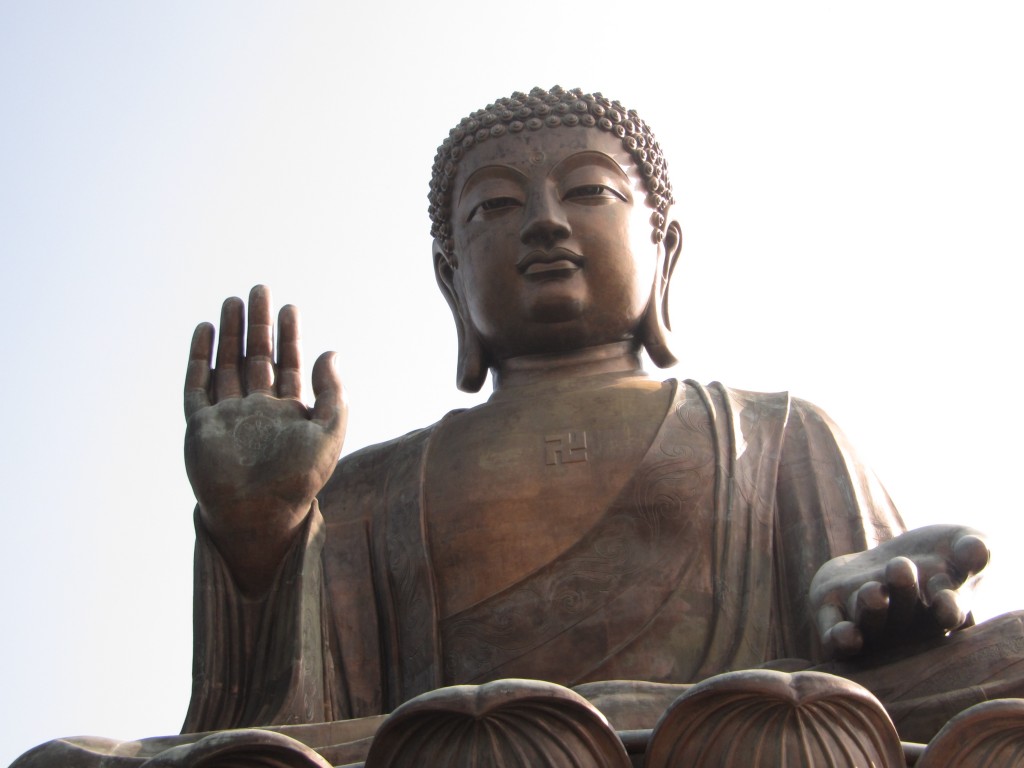 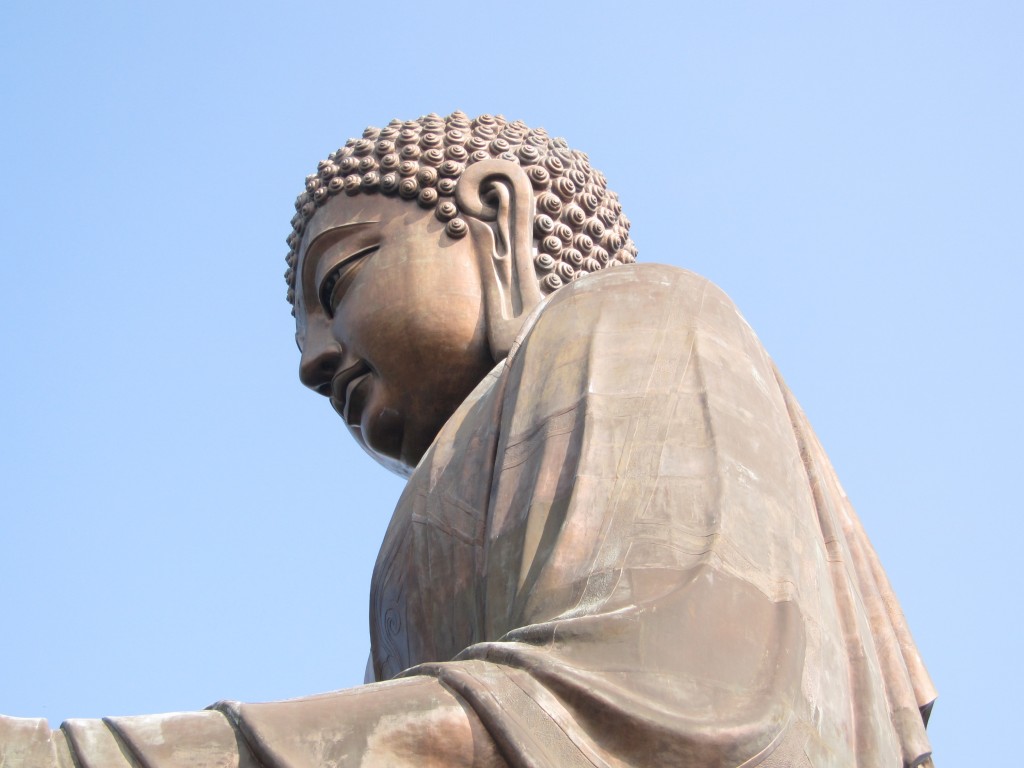 Even though it’s a bit of a journey to get there I’d recommend doing this if you want to see something different while in HK. I’m glad I did it and it was a nice break for me from the busy city.