The main highlight of our second day in Hong Kong was food! A friend (thanks JH) suggested we go to a dim sum place called Tim Ho Wan. Tim Ho Wan is apparently the world’s cheapest Michelin-starred restaurant. The minute I heard about it my curiosity was sparked and after checking out reviews on TripAdvisor I knew we HAD to go to this place. A restaurant ranked #5/2988 restaurants in HK based off traveler reviews is not to be missed! 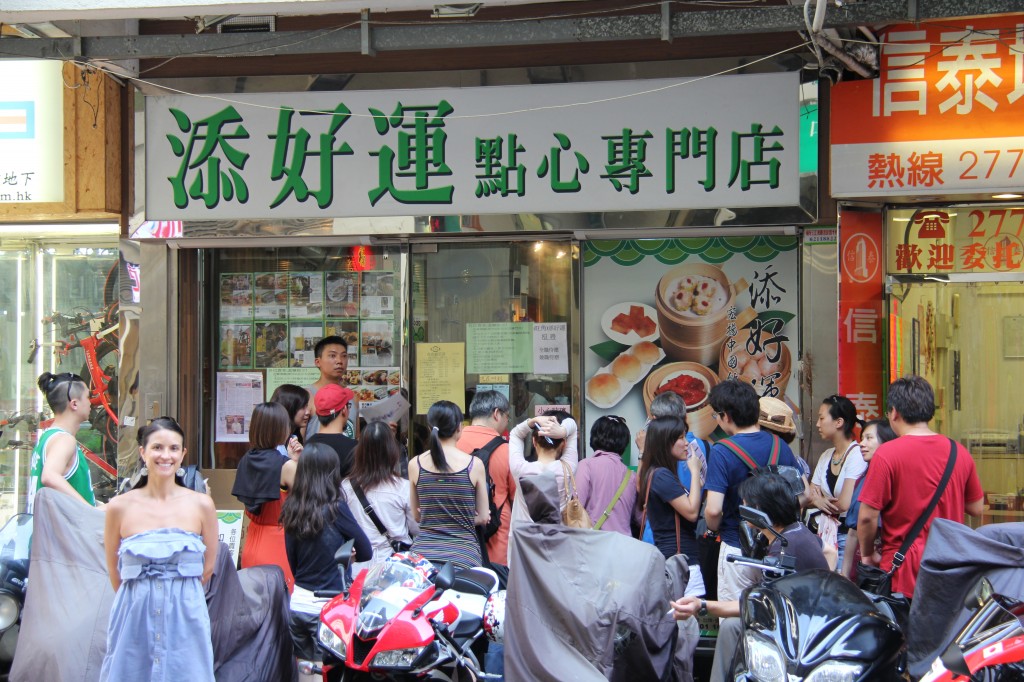 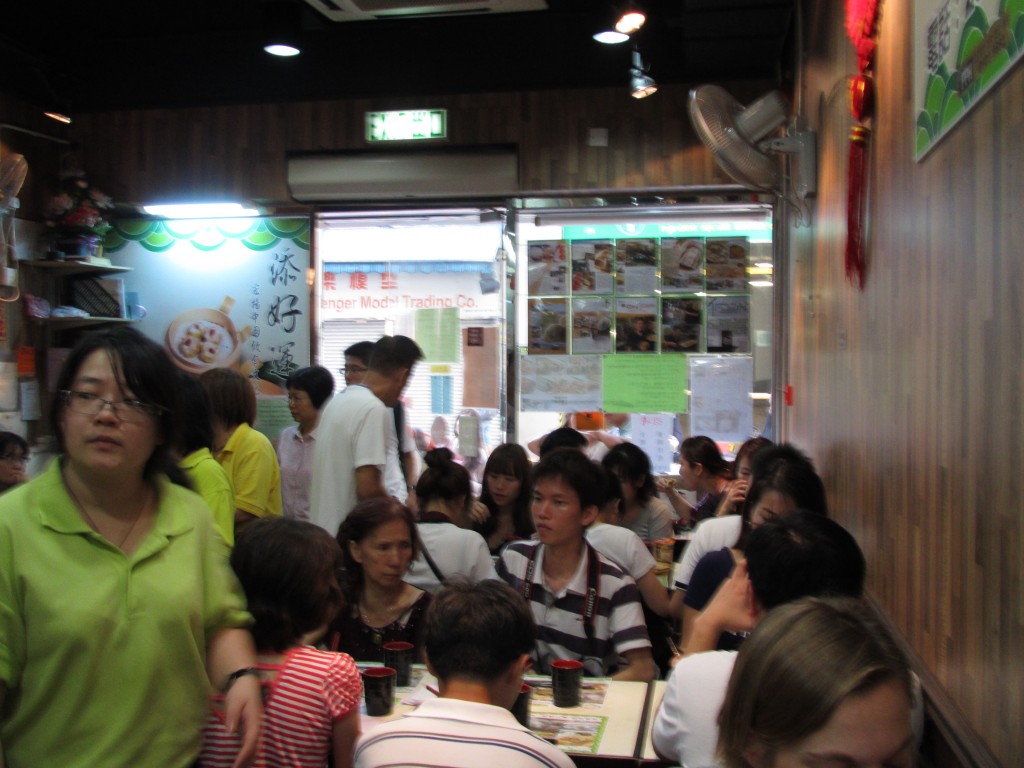 We were fairly warned about the 1 – 3 hour wait just to sit down in this small, no-frills hot spot. Our original plan was to get there at 10am and get our number, explore around the local market in Mong Kok for a couple of hours, then we’d be eating around early afternoon. After dinner and a few drinks the night before we weren’t exactly bouncing out of bed at 8:30am so we got a bit of a later start. All good though. Nothing worse than feeling like you’re on a strict schedule on a holiday.

We took a taxi over to Mong Kok which is where Tim Ho Wan is located. This area is very different from the Central area and SoHo areas. There are mostly locals around the area so you get more of a taste of local culture. When we arrived at Tim Ho Wan we knew we were at the right place by the crowd of people standing outside the door. A woman was speaking to the crowd in Chinese and calling out numbers, or what I assumed was calling out numbers. It was pretty much chaos. Ozdane bravely forged ahead to get us a number. It was quite amusing watching this big Aussie guy standing there amongst the locals. He stood out like a sore thumb. Ozdane got our number and the woman told him it would be 3 hours, yes I really said 3 hours to wait. Our plan to eat at 1 or 2 suddenly changed into 3:30 or 4 which we were fine with as long as we could find a snack in the meantime. 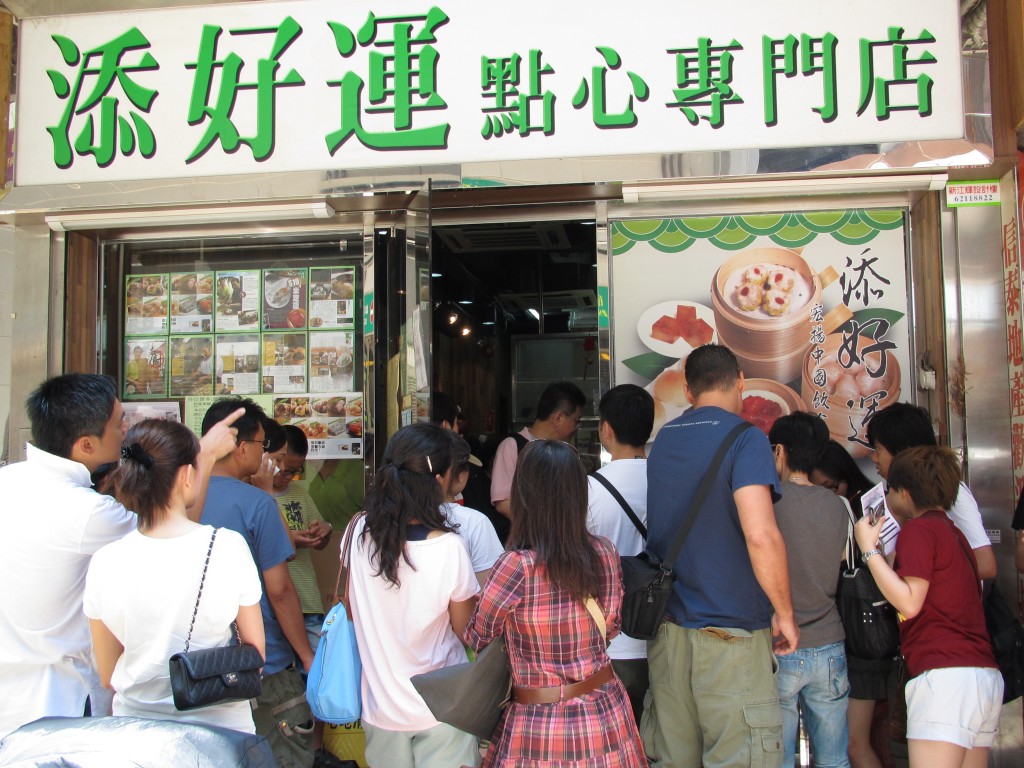 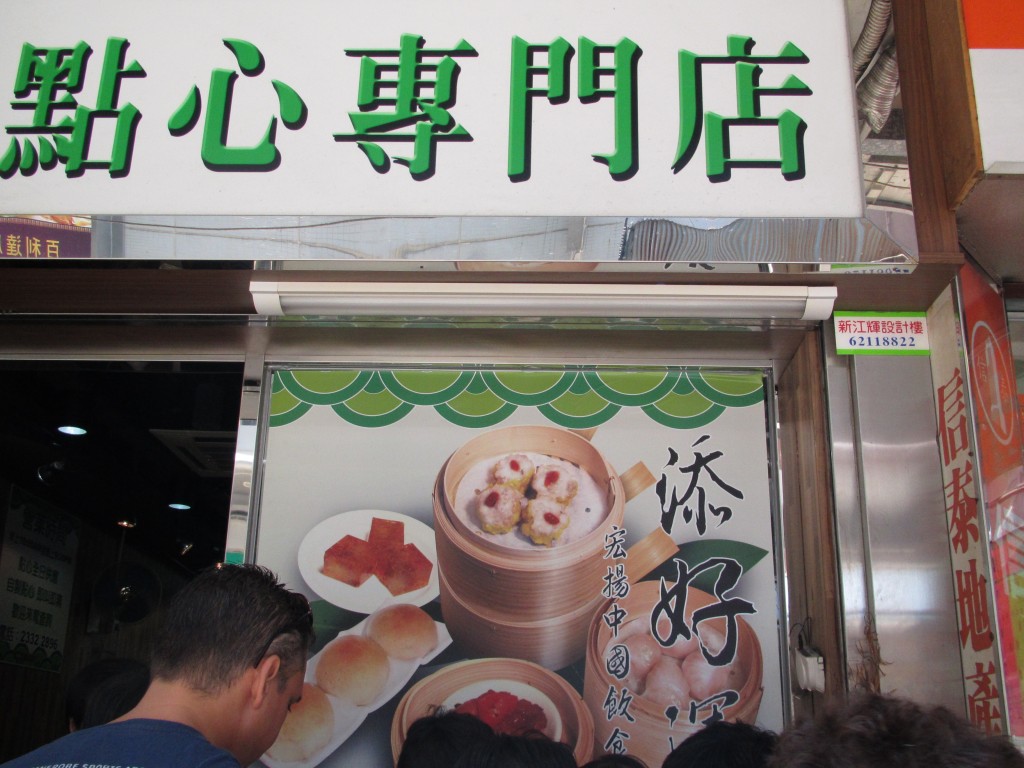 So we wandered around the streets of Mong Kok popping into shops along the way. There is a Ladies Market there and also lots of streets that sell nothing but sports shoes and clothing. Nike, Adidas, Converse…you name it, we saw it. Then in the middle of the craziness and discount shops was The Body Shop. It seemed odd but nothing really surprises me anymore when exploring around countries in Asia. 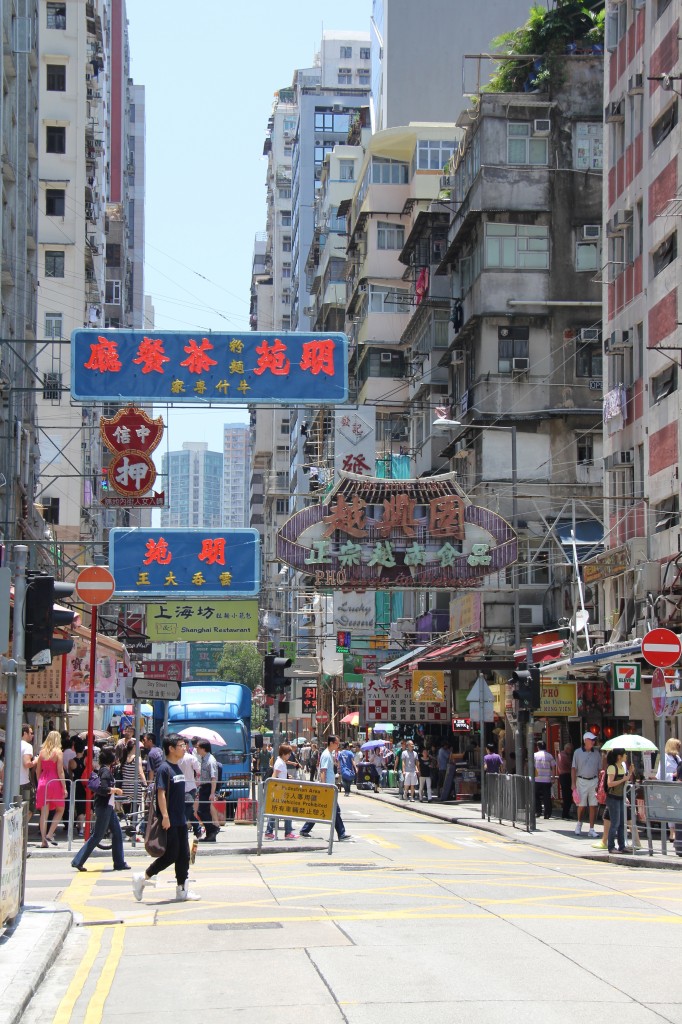 After a couple of hours of walking the streets in scorching heat we made our way back to Tim Ho Wan just in case our number would be called early. No dice. Good try though. So off we went again exploring around the packed, sizzling streets of Mong Kok. I had sweat and sunscreen dripping everywhere and anywhere at this point. Attractive I know. Thankfully Ozdane located a Starbucks that happened to be in a shopping center which meant refreshments and air-conditioning or as I liked to call it yesterday…heaven! I think this was the happiest I’ve been to see a Starbucks! We plopped ourselves down and parked it there until our 3-hour wait was up. We stumbled upon some Hong Kong designer boutiques in the shopping center so I even picked up a couple of things. Nice bonus! 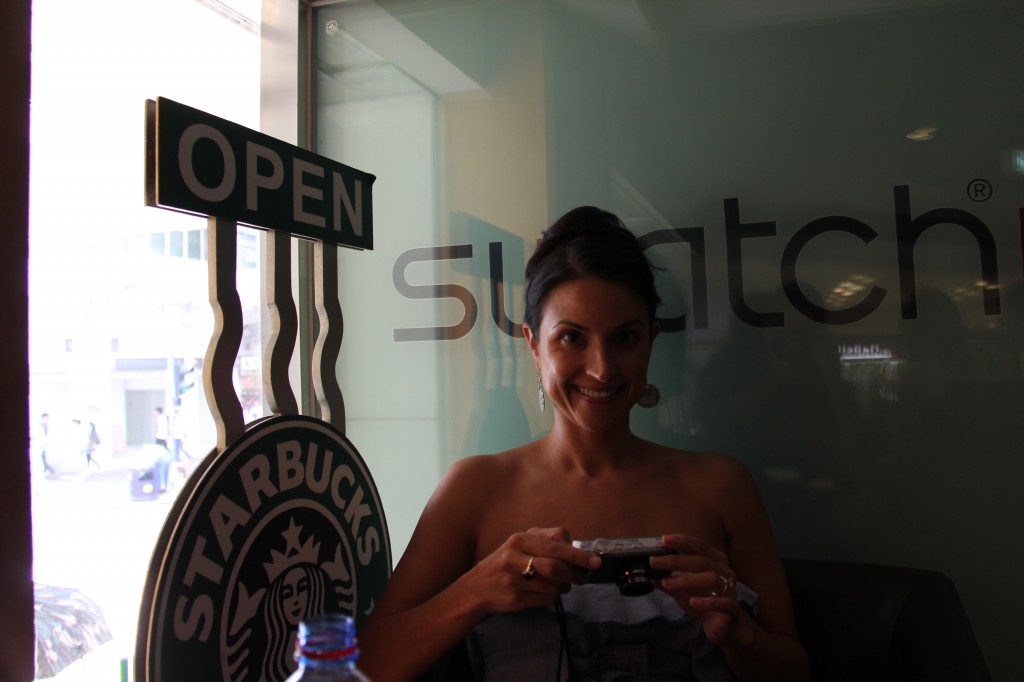 Finally the time had come! We were actually being seated in Tim Ho Wan and about to eat delicious dim sum! They poured us tea and we were getting situated when all of a sudden the table was bumped. The next few minutes felt like slow motion. My toe was smashed by the table, ouch, then before I knew it both cups of tea were spilled and hot tea was rolling down the table in my direction and then right onto my lap! The next few mintues were chaos. Burning hot tea spilled onto my thigs, I jumped up letting out some sort of half-scream, whimper of pain. Everyone in the place gasped and was staring. The waitresses came running over, the chef stopped what he was doing and poor Ozdane was frantically trying to lift my dress off my legs! It was quite a scene and probably the most action that little joint has seen all week. I was ushered to the tiny bathroom by a waitress who spoke broken English who gave me a tub of some cream or magical potion to put on my legs. I figured she knew better than I so I put it on while she was wringing out the bottom of my dress. She kept saying sorry and I finally said, “No, not your fault. Big man, small table!” This got a big laugh and the mood was instantly lightened.

After everything had calmed down we were able to enjoy the scrumptious food at this magnificent little treasure in Mong Kok! The pork buns were amazing! They clearly were one of the favorites as they were pumping them out of the kitchen non-stop. Every bite of everything we ordered was delicious. It all seemed to melt in your mouth. We understood what all the fuss was about and I will say it’s worth the long wait to get a seat to eat at Tim Ho Wan. It’s a must-do if you visit HK. As long as you go there knowing there will be a substantial wait and you plan on doing other things during that time, you’ll be fine. Walking around Mong Kok is a good contrast to some of the more touristy areas anyway. 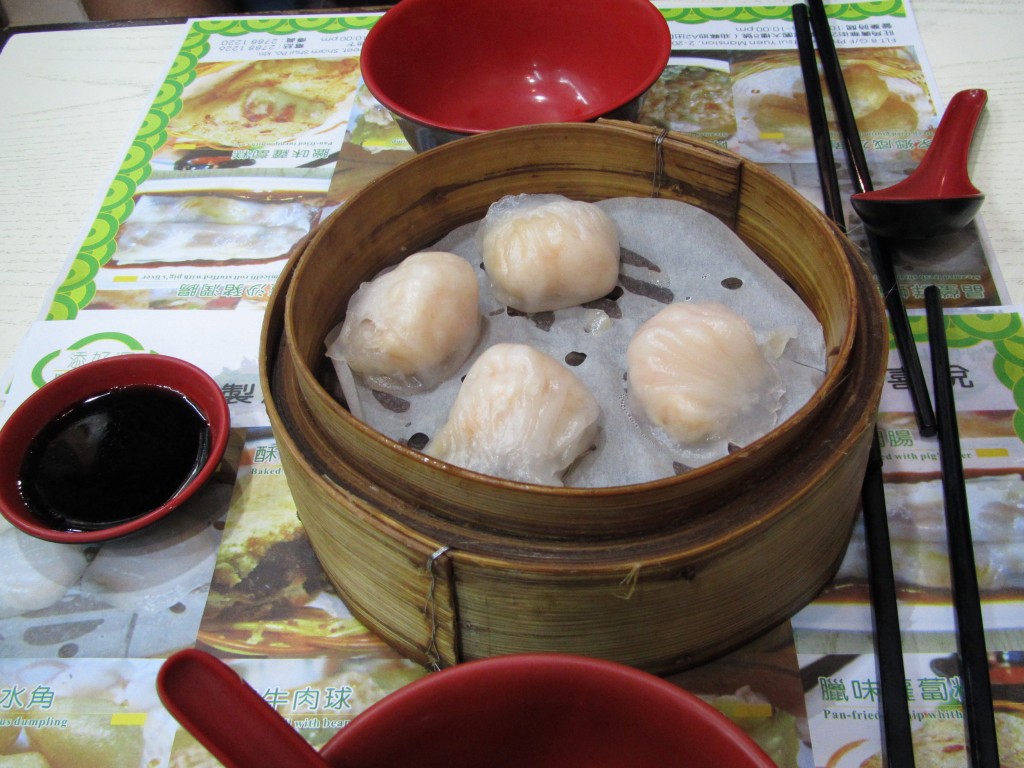 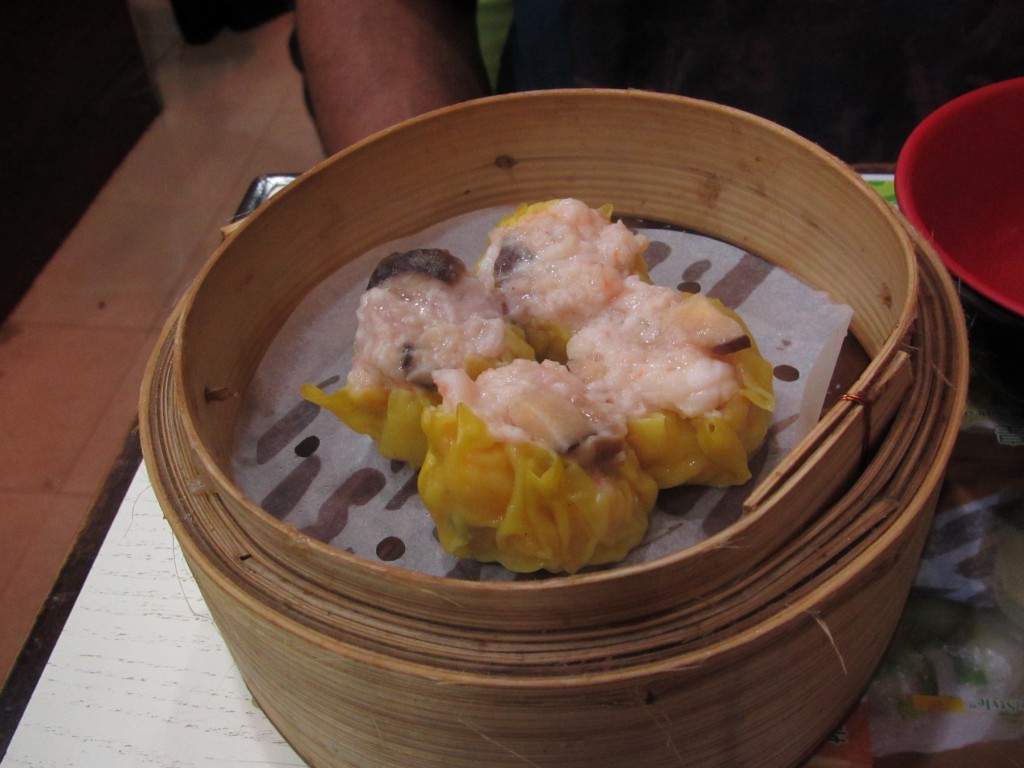 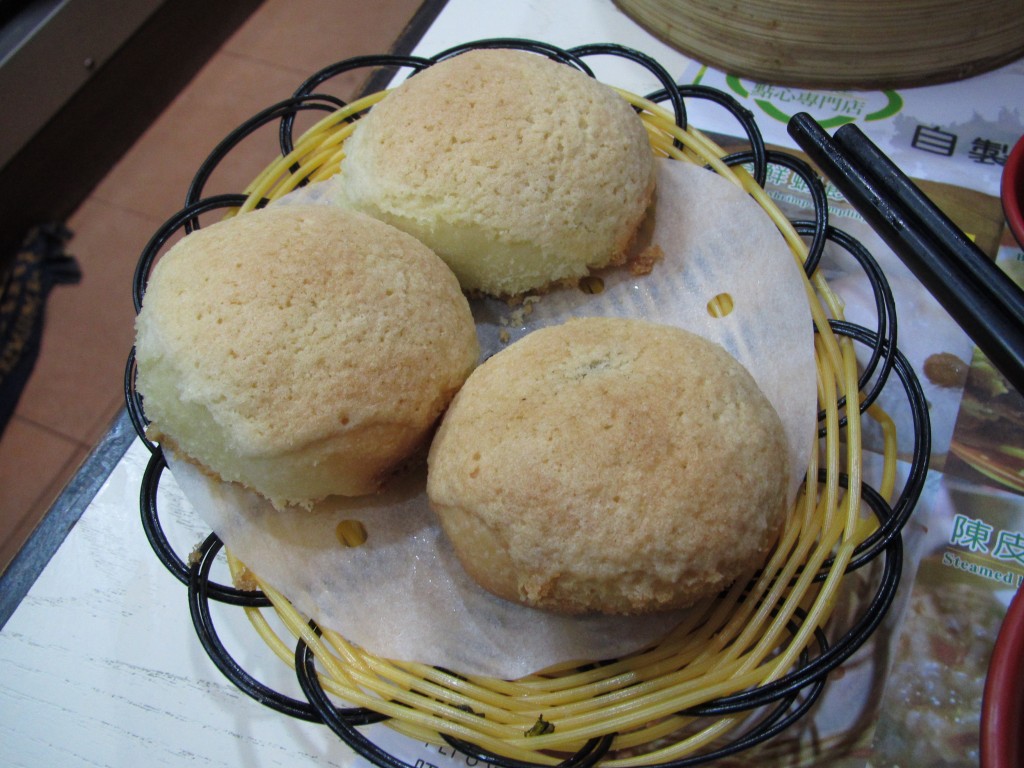 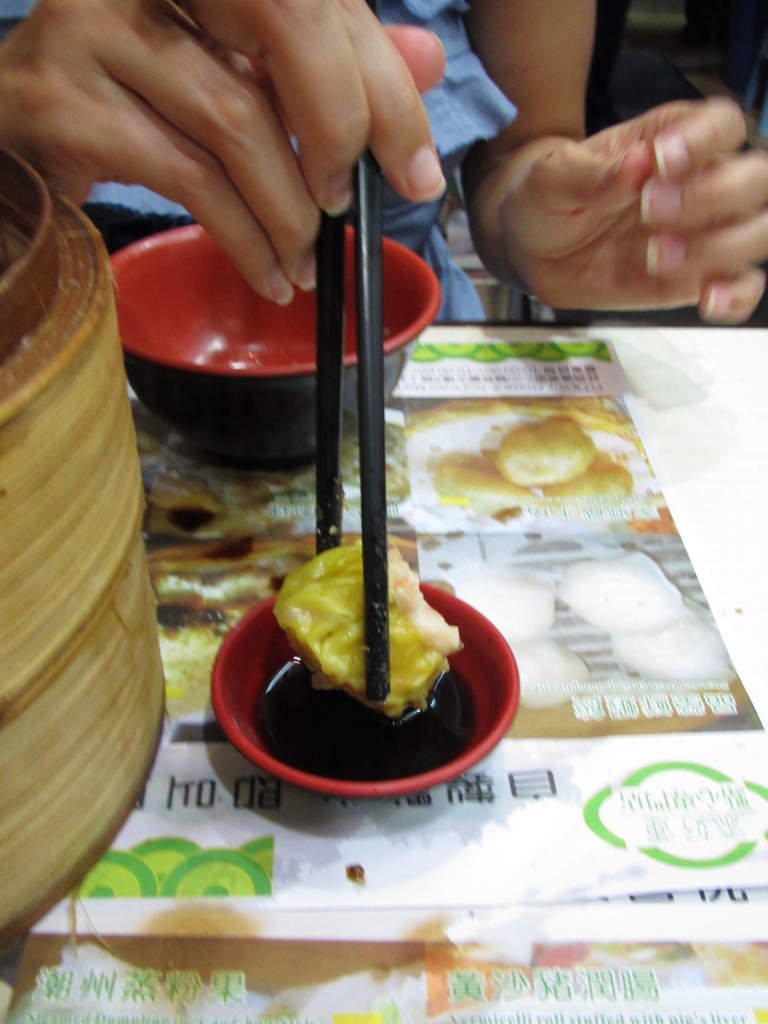 We finished our meal and left Tim Ho Wan with happy, full bellies. I thought maybe it would be less busy later in the day but when we walked out there was another crowd forming. I guess they were getting into the early dinner hours. Tim Ho Wan is open daily from 10am – 9:15pm so you really could eat there anytime you want. Going at non-standard meal hours would probably be a smart move. Sunday is probably one of the busiest days so I’d say 3 hours is the max you could wait. It was all worth it and I’d do it again to have the delectable dumplings at Tim Ho Wan! Was it Michelin-star worthy? I’m not a food critic but I do know I’d wait 3 hours again to eat here and there aren’t many places I say that about. I still can’t get over how inexpensive it was. We literally paid $15 SGD for our entire meal which was 6-7 orders of different dumplings, etc. This is why it’s the cheapest Michelin-starred restaurant in the world. Tim Ho wan gets a big thumbs up from Chamorro Chica and Ozdane!

Next up…evening ferry over to dinner at Hutong! Stay tuned for my next post of another food experience in HK.