Ozdane and I had a great first day in Hong Kong! Even though we were melting in the sweltering heat, we enjoyed it. Today it was an average of 33 celsius/91 farenheit and humid. It was toasty!

We decided to have a day of exploring a couple of different areas and not really have a set agenda. After enjoying a nice breakfast at our hotel we headed to Hong Kong’s SoHo area (South of Hollywood Rd) and Wyndham Street. SoHo is one of the areas expats flock to for great restaurants, bars, etc. You can find every type of cuisine there and a variety of drinking holes. Boutiques, art and home wares shops line the streets as well. In addition to all of this though there are a lot of little local markets and shops. We would walk down one street full of fish markets, produce stands and traditional Chinese food then we’d turn the corner and see a Subway, spa, nail salon a pub called Bourbon Street or an Italian restaurant.  It is quite a mix of old meets new in terms of culture around these parts. 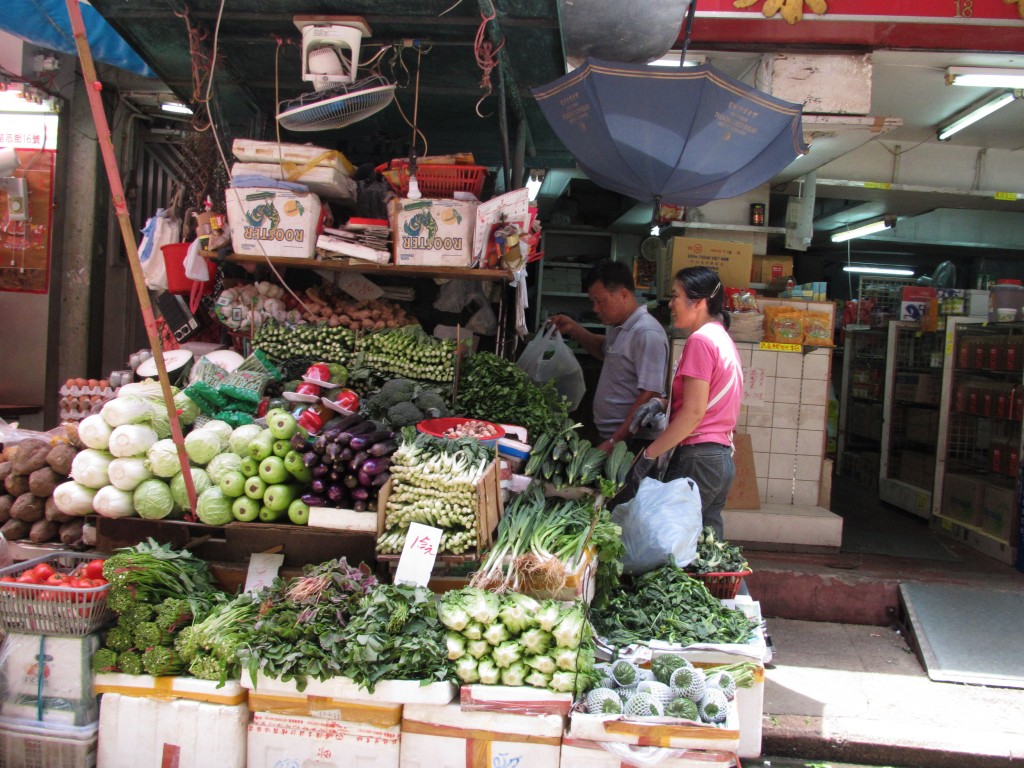 One thing I really like about Hong Kong are the hills around the city. It bit reminds me of San Francisco. I find Sydney and Singapore to be relatively flat cities where San Francisco is famous for all of its hills, like Lombard Street for example. If I look out our hotel window here in HK I see the city skyline with all of the tall skyscrapers but to the left I see hills with large houses and lots of green. It’s nice to see the diversity in this city. 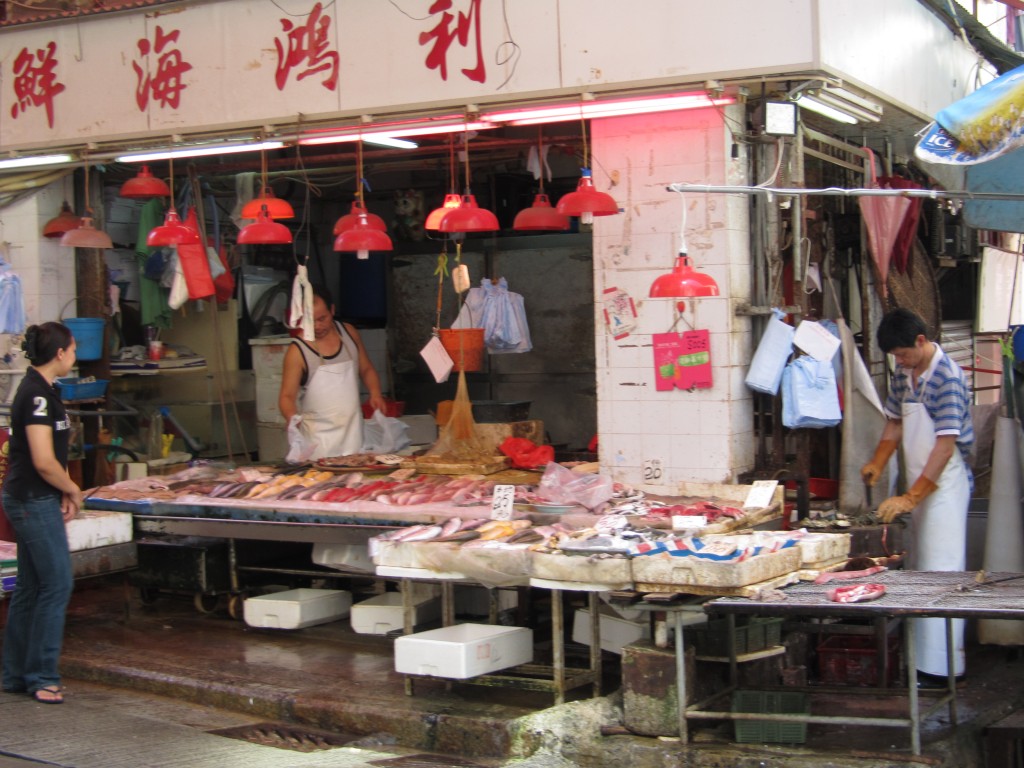 Fish at street market. The guy in the right corner is cutting off crab’s legs while they are alive! 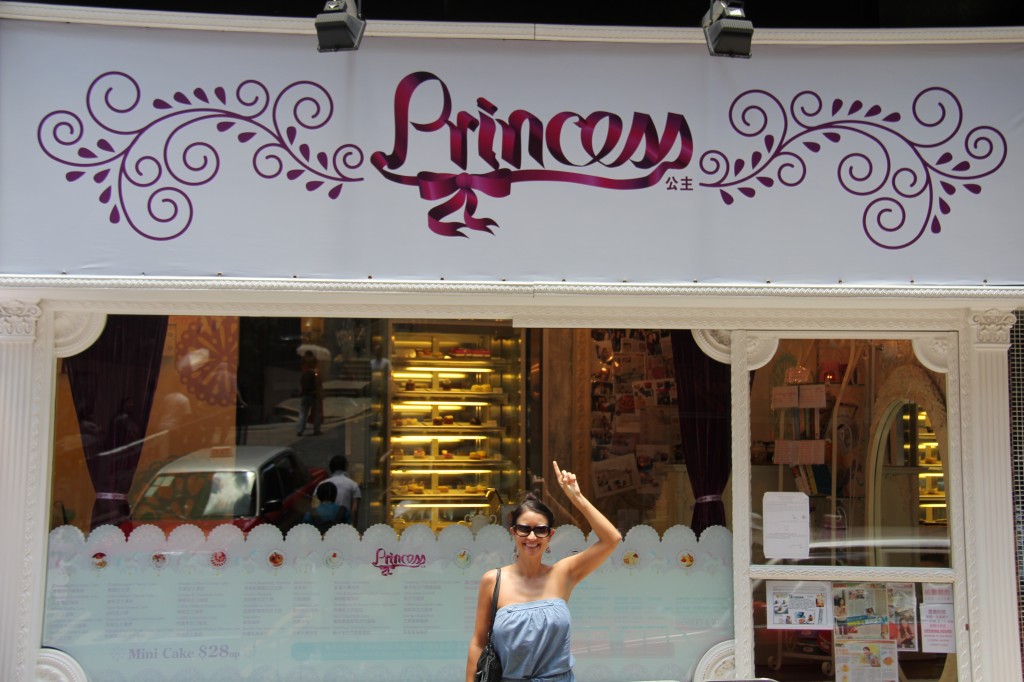 After walking around the SoHo/Wyndham area we wandered down to a spot where you looked out over the Hong Kong harbour. The minute we got closer to the water I felt more calm being away from the craziness in the crowded streets. I knew when I saw this just how diverse this city can be. I love that it’s very much “old meets new” in Hong Kong. There is still a strong presence of culture and tradition but it has a cosmopolitan feel at the same time. I think it’s a very appealing combination and can see why so many expats live here.

After a couple hours of walking around the streets we needed a break in some air-conditioning and a cold beverage. We made our way back to the SoHo area and popped into a very cool and inviting restaurant that ended up being Italian. The place was packed out and expats walking in seemed to know everyone, including the people working there. I found this very similar to all the expat joints in Singapore. No, we weren’t eating local but we were OK with that as a cold beverage and re-fueling were a priority. The food was great and hit the spot. After our much needed pit-stop we hit the streets again checking out a few funky stores along the streets.

One recommendation we got from a colleague was to check out an area called Stanley if we had time. We were told was that it was a beach, casual area where you could eat, have a few drinks and it sounded like quite a different scene from the main areas around the CBD. Keen to adventure onto something different, we hopped in a cab and off to Stanley we went.

As we left the city streets in our cab we noticed more and more greenery surrounding us and then suddenly beaches, sparkling water and some jaw-dropping residences were before our eyes. We couldn’t believe the great contrast we were seeing. Weren’t we just walking through crowded, packed streets with live fish in buckets around us and the smell of fruit going off in scorching heat?! Now we are seeing this beautiful, serene beach environment. We were amazed! First we saw Deepwater Bay then Repulse Bay and made our way to Stanley. We felt like we were in a completely different place. This wasn’t a part of Hong Kong you hear people talk about. It’s like a hidden treasure. Not sure if many tourists know about these parts? 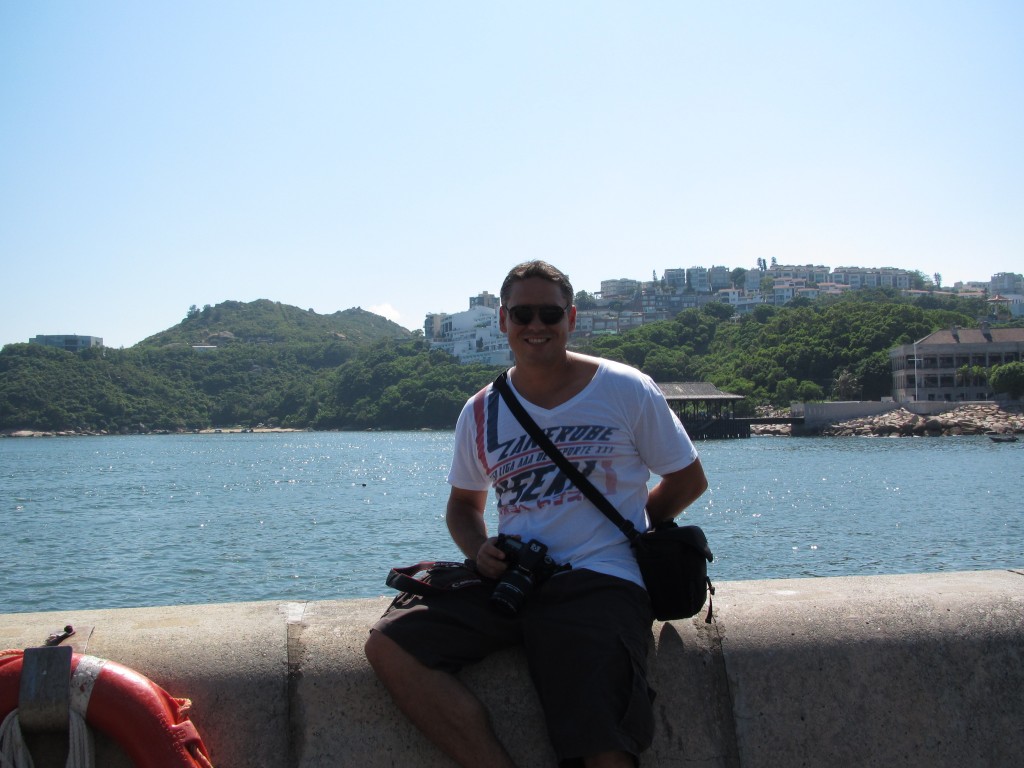 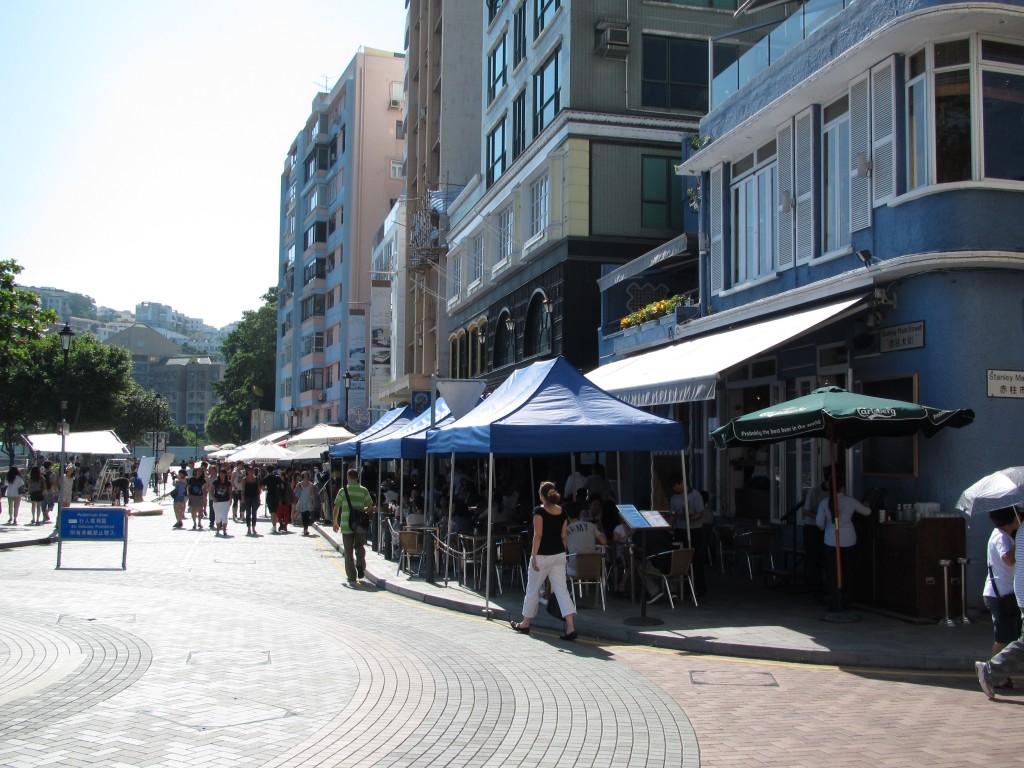 We hit the Stanley market first which was similar to most street markets you find around Asia. You can get everything from clothes to electronics, knick-knacks, jewelery or anything else really. You zig-zag your way through the various stalls until you finally find your way out. We thought we would find our way to one of the beaches we saw from the taxi so we started to follow a youth tour group who we assumed knew the way. Hmmm big mistake!  Long story short we ended up realizing there wasn’t much to see where we were headed. We were both in desperate need of a cold beverage in the heat so we turned back. We made our way back down to where we saw the waterfront promenade and were very pleased to see a number of restaurants and drinking holes. The places were spilling with patrons enjoying ice cold beers..bingo! That’s what we needed and that’s exactly what we did. 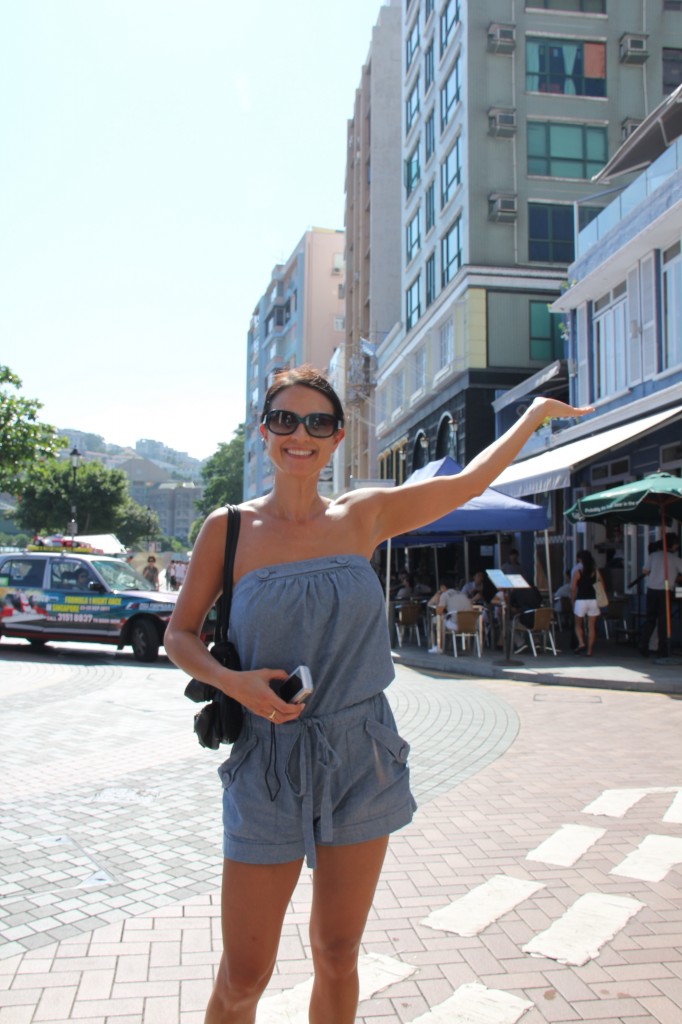 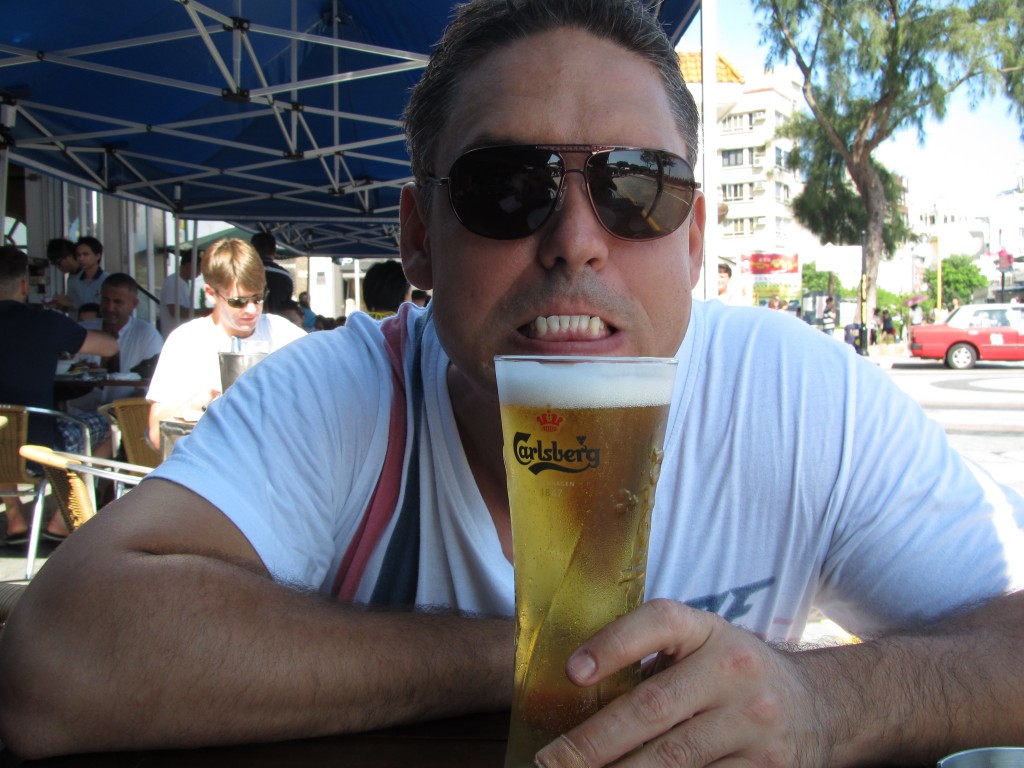 Now we are back at the hotel having a bit of a rest before heading out to dinner. Well, I’m writing this post but Ozdane is happily having a little snooze. Tonight we are going to a restaurant called, Lily & Bloom, a recommendation from a friend that looks amazing! I’m very excited to experience Hong Kong at night! In pictures I’ve seen the city skyline looks spectacular lit up at night and I can’t wait to see it in person.